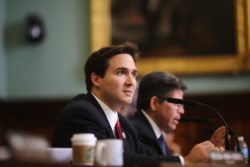 Recently the BSA has come under fire from the City Council. In 2011 the BSA granted 97% of requested variances, while community boards only supported 79% of the applications. At an October meeting of the Council’s Zoning Subcommittee this year City Council Member Antonio Reynoso expressed shock at the BSA’s willingness to grant special permits against the wishes of the community boards, saying, “It seems like the systems that are in place are limiting community input.” At that same meeting Subcommittee Chair Donovan Richards had vowed that the City Council would be taking a closer look at the BSA.

At the December 6th City Council meeting, those concerns came to fruition with the introduction of five new bills intended to curtail the BSA’s apparent flouting of the zoning code. While introducing his legislation—co-sponsored by Majority Leader James G. Van Bramer, Minority Leader Steven Matteo, Zoning Chair Richards, Council Member Karen Koslowitz, and Council Member Rosie Mendez—Council Member Kallos pointed out that the BSA, “mostly known as a rubber stamp for developers, has been criticized for ignoring objections of community and elected officials, difficulty in appealing determinations without written decisions and short time frames, and ultimately ‘rezoning’ by variance without public review.”

The genesis of the proposed legislation can be traced to a 2004 study by The Municipal Arts Society titled, “Zoning Variances and the New York City Board of Standards and Appeals.” Participants in the study included the now Commissioner for Housing Preservation and Development Vicki Been and Professor & Director of the Center for New York City Law at New York Law School Ross Sandler. The study’s committee recommended improving the application processes of the BSA through legislation, and providing better oversight of the BSA, adding expertise to the BSA.

“The BSA is the essential escape and moderating agency for zoning. It is good that the City Council is examining its role and procedures and we welcome the Council’s review of this important public process,” said Ross Sandler.

“In 1976 and 2004, MAS released landmark studies about the New York City zoning variance process, which has been a persistent concern for neighborhoods trying to preserve their unique identity and character,” said Gina Pollara, President of The Municipal Art Society of New York. “Bills recently drafted by the New York City Council begin to address the problem by requiring the Board of Standards and Appeals to regularly publish data about the number and location of zoning variances.”

The five bills will be coupled with five other previously introduced bills. The package has been slated for a public hearing by the Committee on Governmental Operations, which Kallos chairs, on December 14, 2016. For more detailed information on the contents of the bills, see below.

Introduction 0282-2014, sponsored by Council Member James G. Van Bramer, would amend the City Charter regarding how the BSA weighs community involvement in its decisions. Currently, the Charter requires the BSA to hear the arguments of the city planning commission, community boards and borough boards in respect to any matter before the BSA. The proposed legislation would further require the BSA in its final determinations to refer to any argument presented to the BSA and to describe the extent to which the BSA considered those arguments.

Introduction 0418-2014, sponsored by Council Member Karen Koslowitz, would amend the City Charter regarding the written decisions of the BSA. Currently, the Charter requires final determinations by the BSA to include what the specific requirements were required for the applied for special permit and findings of fact that fulfilled such requirements. When the BSA grants a special permit, contrary to a community board’s recommendation, the proposed legislation would require the BSA to explain why.

Introduction 0514-2014, sponsored by Council Member Steven Matteo, would amend the City’s administrative code regarding the expiration of variances granted by the BSA. The proposed legislation would require the BSA to notify variance holders six months prior to the expiration of their variances. Persons who continue to use a zoning lot subject to a variance that has expired would be subject to a $500 penalty for the first six months of unauthorized use. The penalty would increase by $500 for each succeeding six month period.

Introduction 0691-2015, sponsored by Council Member Rosie Mendez, would amend the City’s administrative code regarding the statute of limitations for appealing BSA determinations. Currently, aggrieved parties have thirty days to appeal determinations to the Supreme Court. The proposed legislation would allow appeals up to four months after a determination.

Introduction 1200-2016, sponsored by Council Member Donovan Richards, would amend the City Charter to require the BSA to notify the council member for the relevant council district when an application to vary the zoning code or an application for a special permit is received by the BSA.

Introduction 1391-2016, sponsored by Council Member Ben Kallos, would amend the City Charter regarding the composition of the BSA’s staff. The proposed legislation would require the executive director of the BSA to appoint at least one staff member that is a state certified general appraiser and a member of the Appraisal Institute with expertise analyzing and auditing real estate investments.

Introduction 1392-2016, sponsored by Council Member Ben Kallos, would amend the City Charter regarding requirements for applications before the BSA. The proposed legislation would require each applicant, property owner and preparer of any document to provide a notarized certification, under penalty of perjury, that the statements made in the application are true. The legislation would further require applicants, in addition to any evidence in support of a claim of uniqueness of physical condition, to provide a description of the character of properties within a 400 foot radius of the project, an analysis of such properties, and where publicly available any information regarding the dimensions of such lots, descriptions of any non-complying buildings or structures, a description of any environmental hazards, a description of any geotechnical issues and prior decisions of the BSA with such lots. The legislation would also codify additional requirements for applicants with rental properties, and cooperatives and condominium properties.

Introduction 1394-2016, sponsored by Council Member Ben Kallos, would amend the City Charter to require the BSA to provide on its website an interactive map that displays the location of all variances and special permits approved by the BSA since 1996.

By: Jonathon Sizemore (Jonathon is the CityLaw Fellow and a New York Law School Graduate, Class of 2016).