Get Updates on Your Parks

New Yorkers for Parks rates district 5 among the last for its amount of park space for the number people living here. That is why I during my time in office I have made it a top priority activate and improve our current parks while at the same time working to find new park space wherever we can. The East River Esplanade was literally falling into the river in 2013. After I was elected I joined Congress Member Carolyn Maloney as co-chair of the East River Esplanade Task Force to get repairs in our District's largest park underway as quickly as possible. In four short years, we’ve secured and overseen the spending of $190 million in public and private dollars with more funds coming for our parks.

The East Side is getting eight new blocks of parkland. As the New York Daily News reported, construction to fill the gap between East 53rd and 61st streets on the East River Esplanade has begun. This project will connect a combined 1,000 acres of open space in both directions on the East River Esplanade and create a new greenway by adding additional acres of park space. The groundbreaking included East River Esplanade Taskforce Co-chair Congress Member Carolyn Maloney, Deputy Mayor Vicki Been, NYCEDC President and CEO James Patchett, Parks Deputy Commissioner Alyssa Cobb Konon, and NYC DOT and Manhattan Deputy Commissioner Jennifer Sta. Ines.   Once completed, the new greenway will serve as a vital connection for all New Yorkers, especially runners and cyclists. Thank you to Mayor de Blasio, for the $100 million allocated for construction. Soon my constituents and I will finally be able to run, bike or walk the entire length of my district from Midtown East to East Harlem.

Manhattan Borough President Gale Brewer and I, who together provided $3,270,000 in funding, joined NYC Parks to breakground on Carl Schurz Park Playground.

At the request of parents, construction was postponed until the end of the summer. Construction completion is anticipated for September 2020, with Catbird Playground at the north end of the playground expected to remain open throughout.    The new playground upgrades will include:

Upper East Side dad, Greg Davis, whose two sons play basketball in John Jay Park, wouldn’t take no for an answer as he persisted for four-years alongside Council Member Ben Kallos for the city Parks Department to improve dilapidated courts. The courts were nothing more than cracked asphalt, rusted metal backboards, and badly angled net-less hoops. Greg succeeded in getting improvements done by the Parks Department, with newly painted playing lines, a smooth playing surface, and three new polycarbonate backboards with shooting square and nets.

Greg had nearly perfect attendance at more than 40 First Friday meeting over four years, sharing his work through my staff, 311 requests, and direct advocacy with Community Board 8, and with the Park Department.

Last summer, Parks Department offered to replace the backboards in exchange for $7,500 from my office, which was immediately approved in July, funded in mid-August, with the work completed in one day on Wednesday, August 23, 2019.

cutting and celebration that included music, games, and magic. The new park was the result of a collaboration between the Parks Department and 1 Sutton Place South who subdivided their private garden in order to provide more park space for the community.

In 1939 when the F.D.R. Drive was originally being built, Mayor Fiorello La Guardia, Robert Moses, and Paul Hammond, a racing yachtsman who lived at 1 Sutton Place South negotiated a permanent easement in a friendly condemnation proceeding, where the city agreed to provide the decking and pour soil over the roof to protect against the noise and odor of passing cars, leasing it back to the coop for $1 a year for 50 years.   Mr predecessor Council Member Jessica Lappin secured a 2011 agreement between the city and 1 Sutton Place South with $1 million from the cooperating and $1 million secured from the city by her office while my Office brought in an additional $875,000 in 2017, bringing total funding for this public-private partnership to $2,875,000.

I'm glad to see that block by block we are adding more parks space and opening new parks all over the district to give the most crowded neighborhood in the city the green space they need to escape the din of the city. For more info visit  benkallos.com/press-release/. 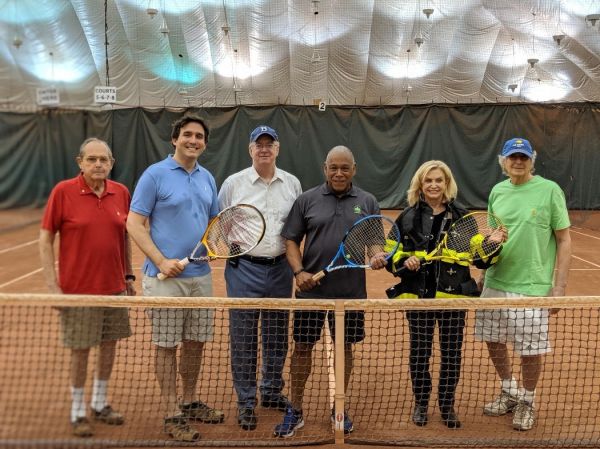 After years of our advocacy alongside my fellow elected officials and Community Board 8. The Queensboro Oval is now open to the public with an expanded summer session, more affordable drop-in hours, and new programming to mark the beginning of a more accessible Oval for all New Yorkers. The change comes The Parks Department listened to our concerns that prices at the tennis club were expensive and public access should be the top priority when awarding the next contract.

Some of the victories we won for the community include:

My advocacy to fix this issue involved supporting a rally at the space in 2016 organized by Community Board 8 members Susan Evans and Peggy Price. I also wrote a letter to the Parks Department in which I raised several concerns as well as testifying before the Franchise and Concession Review Committee (FCRC) and the Parks Department. Now that Parks has awarded the new contract I and listened to many of my request on behalf of residents I am looking forward to seeing the community be able to enjoy this land. For more info visit nycgovparks.org/parks/queensboro-oval/facilities/tennis

A Conservancy for Every Park

We supported the launch and funding for conservancies for Sutton Parks and Ruppert Park in partnership with Muslim Volunteers of New York. These new groups join the long-standing and invaluable conservancies we work with at Carl Schurz, St. Catherine’s, John Jay and the East River Esplanade. Conservancies are invaluable in protecting our all-too-limited park space. I hope we can launch a conservancy for Stanley Isaacs and Twenty Four Sycamores Park thereby achieving my goal of having a conservancy for each and every park in my district.

In July 2017 ground was broken on the East River Esplanade sea wall Phase I reconstruction project in Carl Schurz Park. The event was attended by New York City Parks Manhattan Borough Commissioner William Castro joined then City Council Speaker Melissa Mark-Viverito, Council Member Ben Kallos, Congressmember Carolyn Maloney, Manhattan Community Board 8 Chair Jim Clynes and many community members. This groundbreaking initiates part of a $41 million, multi-phase project to preserve and restore the East River Esplanade as a major recreational asset for the East Side community and its visitors from around the city and the world, this $15 million phase is funded by Mayor de Blasio with $12 million and $3 million from the City Council. For more Information read the release.

In October 2017 the official groundbreaking for renovations to the East River Esplanade from 70th to 72nd Streets by HSS was held. The revitalization and improvements by HSS to the East River Esplanade in this section were negotiated by Council Member Ben Kallos as part of the Uniform Land Use Review Procedure (ULURP) for new construction that was voted on and passed the City Council on July 23, 2015. The event was attended by Hospital for Special Surgery (HSS) President and CEO Louis A. Shapiro, Council Member Ben Kallos, Co-Chair of the East River Esplanade Taskforce with Congress Member Carolyn Maloney, Manhattan Borough President Gale Brewer, and New York City Parks Manhattan Commissioner Bill Castro.

In working with Council Member Ben Kallos and the East River Esplanade Taskforce Hospital for Special Surgery agreed to:

This multi-phase project brings closer the master plan for the site closer to completion. Phase 2A, is a $4,664,073 multi-source funded project. The site is a former heliport that sits underneath the “East River Roundabout” sculpture which was installed in 1995 and now is a fully constructed park space. The project transformed the site into a riverside destination with amazing views.

In December 2017 the ribbon was cut and the opening of the East 81st Street pedestrian bridge, connecting the East River Esplanade at the lower level to the promenade at the upper level, known as the John Finley Walk was celebrated.

Representatives from the City’s Department of Design and Construction and New York City Parks Commissioner Mitchell J. Silver, FAICP, joined City Councilmember Ben Kallos to cut the ribbon and welcome residents who waited just to cross it on that morning.

DDC worked with Primer Construction Corporation and STV on the $16 Million project replacing the old pedestrian bridge originally built in 1942. The new bridge is  ADA accessible unlike the old one. Workers installed an ADA-compliant ramp measuring 452 feet long and 9 ½ feet wide. The ramp connects the new pedestrian bridge to the East River Esplanade, making it accessible to everyone. Additionally, the new pedestrian bridge features stainless steel railings and fencing, fresh concrete and new bridge bearings. The esplanade below the structure was also beautified with plantings, boulders, and shrubs as part of the project.

The East River Esplanade is beloved by Upper East Siders, and this new bridge provides the ADA accessible link that was missing. Opening this bridge will help so many of our neighbors in their daily routines, and create a beautiful vantage point to view the East River.

The Brearley School, the Department of Citywide Administrative Services, and Council Member Ben Kallos have formed a public-private partnership to rebuild and maintain a platform known as “The Pier” that had fallen into severe disrepair with rain leaking through onto John Finley Walk on the East River Esplanade. 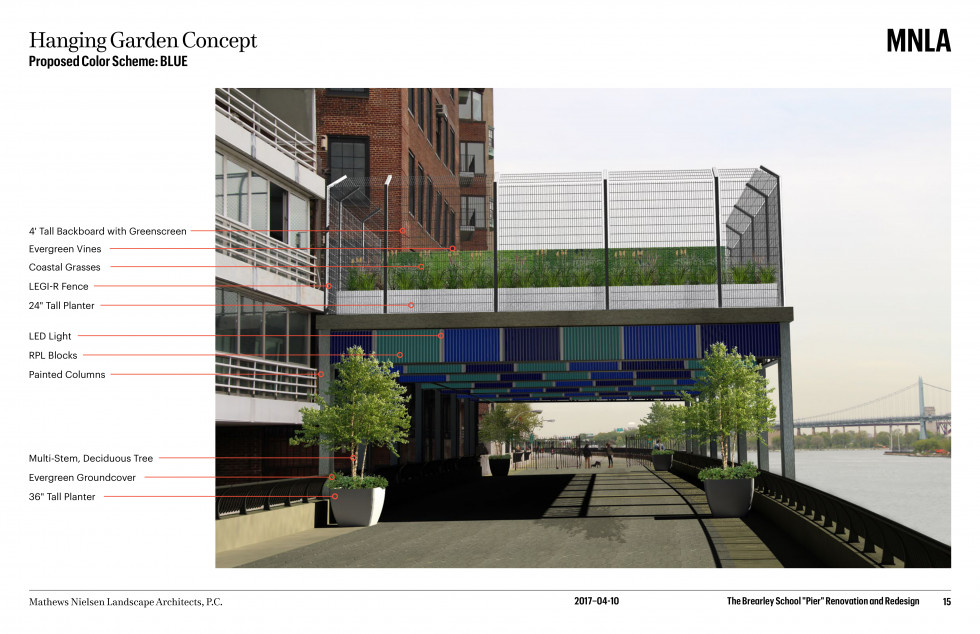 As part of a new lease agreement and in response to concerns raised by Council Member Ben Kallos, the Brearley School and the Department of Citywide Administrative Services agreed to invest over $1 million to rehabilitate the Pier. CIVITAS. The plan will incorporate colorful new designs, contemporary lighting, green walls, and new planters with seasonal plantings maintained through a partnership with a local conservancy. The new Brearley lease will run for the next 20 years, with two 10-year renewals.

The Brearley School and the Department of Citywide Administrative services CIVITAS and the office of Council Member Ben Kallos worked on this deal for over two years. The improvements aim to address community concerns.  For more information read the release, watch the presentation or download the proposal.

Fighting to Open the Queensboro Oval

I led an effort alongside Community Board 8 Parks Committee co-chairs Evans and Price to open the Queensboro Oval to the public. For generations, this 1.25-acre park under the 59th Street Bridge off York Avenue has had a private tennis bubble for most of the year at rates of $180/hr. After organizing a protest and launching a petition with support from Congress Member Maloney, Borough President Brewer, Senator Krueger, Assembly Members Quart and Seawright. Despite the Parks Department's recent decision to keep the area privatized, my office continues to support opening up as much of it to the public as possible. Add your name in support at BenKallos.com/petition/oval

UPDATE: The Queensboro Oval is now open to the public with affordable rates! Read about it in my 5 Year Report